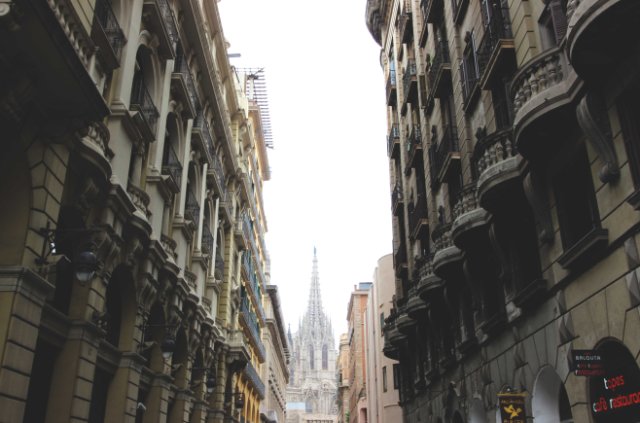 A large majority of our time in Spain was spent in the winding streets of the Gothic Quarter, or in Spanish, Barri Gotic.
As with most old European cities, the oldest quarters were built on top of the original Roman city (those Romans were pretty good city planners). Even some of the old Roman city remains, preserved as sites to see, but for the most part, what attracts the large amount of visitors to this area these days are the surviving Medieval structures. 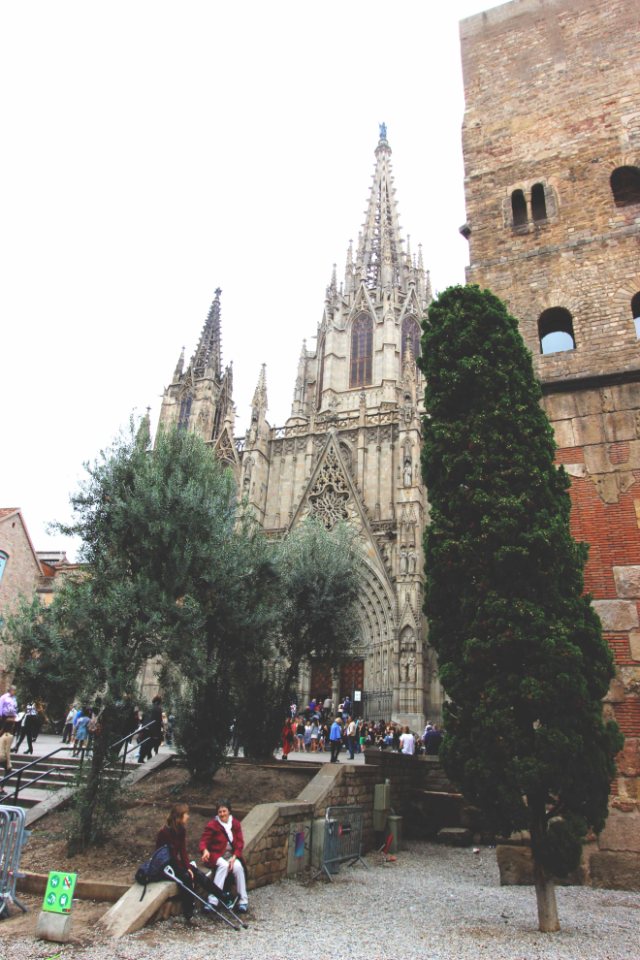 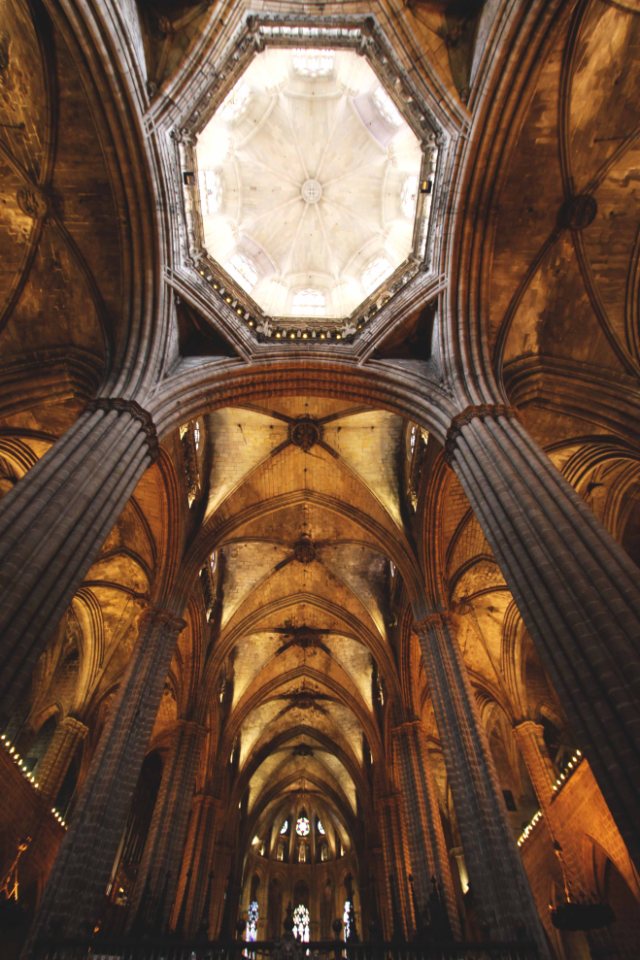 Among and between its winding streets, Barri Gotic reveals beautiful Gothic churches and squares, which are sure to be full of long lunchers, sketch artists, tourists and locals alike. The churches, like the Cathedral of Barcelona above and the Basilica of Santa Maria del Mar father below, are striking, seemingly stark stone structures. However, with stunning stain glass windows, beautiful tree-like columns and Moorish-influenced ornamentation, I found them to be moving and peaceful. I enjoyed their simplicity, low light and striking, vertical lines. 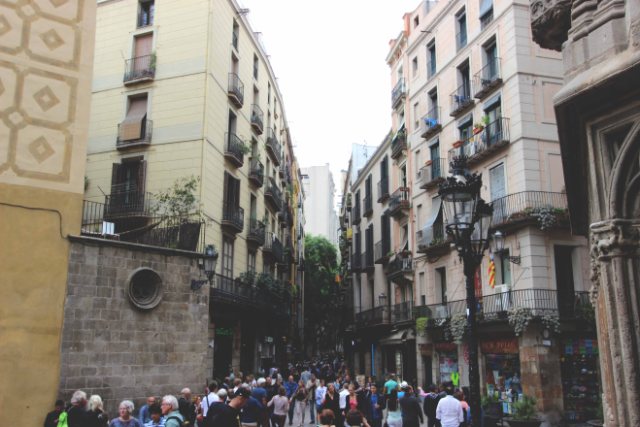 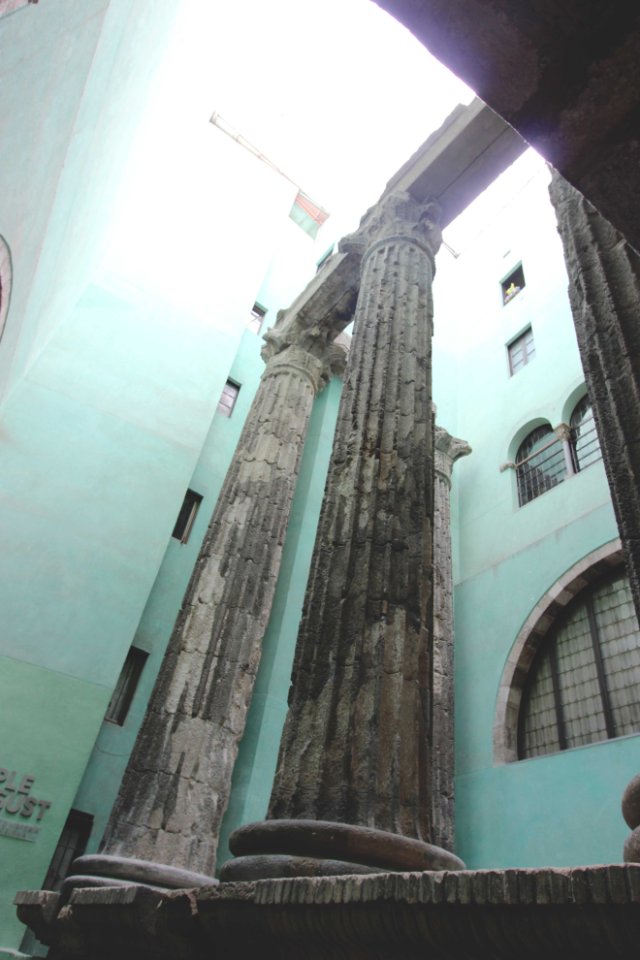 The charming narrow pedestrian streets are lined with small boutique shops, craftsmen, and cafe after cafe churning out churros con chocolate for the tourists (think fair style churros with warm pudding. Seriously….not as good as it sounds).  On of our favorite stops was a tiny Basque bar with good beers, cheap Sangria, little pintxos, and a casual, social atmosphere. It also happened to come right when we needed a bit of a foot break, so that Sangria tasted extra awesome.
The small Jewish quarter can be stumbled upon, and is surrounded by some darling leather craft and soap shops. I am still regretting passing up the slabs of cinnamon soap… But I did leave with some very practical shoes for Finland-espadrilles. We came home and they went straight to the warm weather storage bag until further notice. I do think that Katrina purchased a darling decorative leather satchel. Leather is always a worthy investment, in my opinion. (Plus you get to say things like “Oh this old thing? Oh I bought it at this little store in Barcelona…” like a very cultured snob. Its fabulous.)

Also in this quarter, you will find abstract sculptures, bizarre facades, and bright mosaic works any surface. I love this eclectic aspect of Barcelona- everything is unique and very cool. It is a lively area that could easily consume your entire trip to Barcelona, as you keep discovering more and more charming streets to explore. 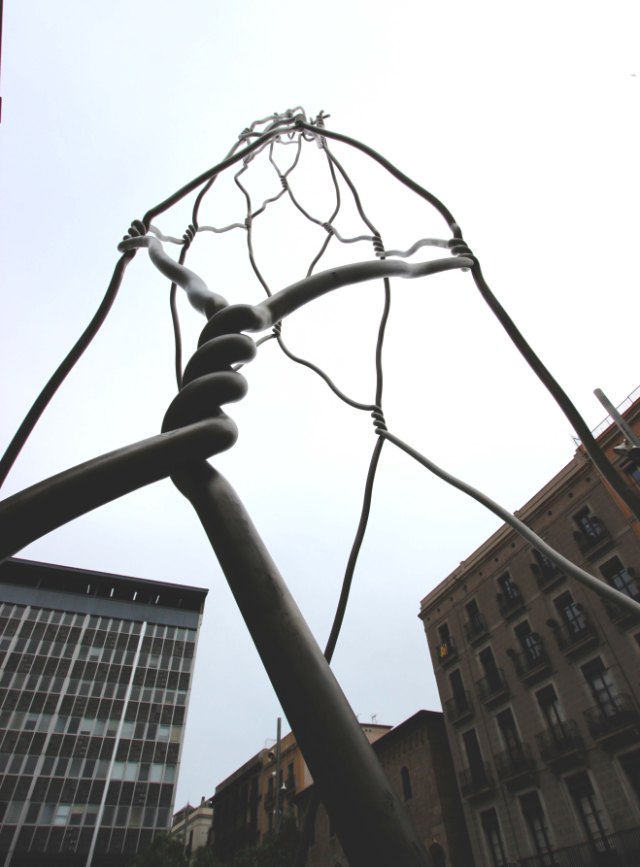 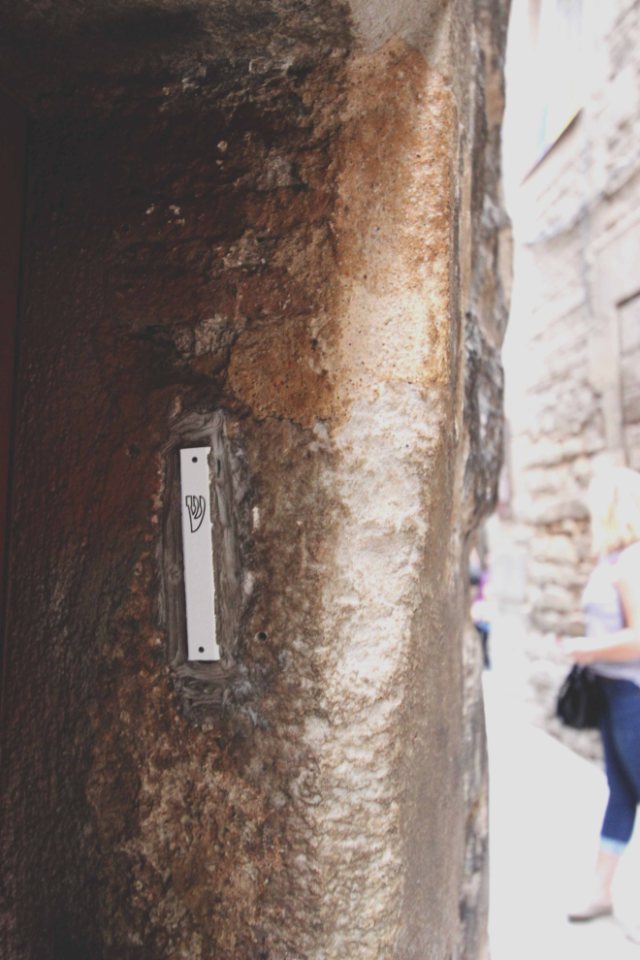 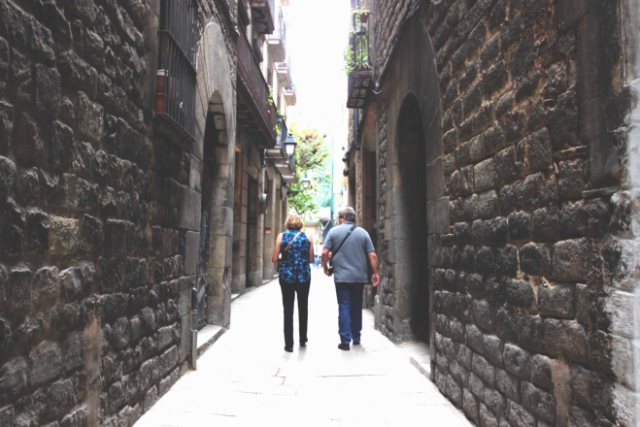 We did also manage to visit the Picasso Museum, which is in Barri Gotic. Even if cubism isn’t really your thing, I highly suggest visiting. His breadth of work is simply astonishing. As one of the few artists to actually acquire fame in his own lifetime, many of his works from the time he was 15 are on display and are simply lovely. I love his early experimental abstract works- particularly his sketches- but his later works are a bit too much for me. However, with all art, I encourage you to not consider if you like it or get it, but if you appreciate or understand it when considering the socio-political-economic climate of the time. Picasso was making statements more than images, and they were extremely successful.
Even so, the museum building is stunning. It is an old restored private residence, with some stark white rooms against gothic windows and mezzanine-d court yards. Simply beautiful. 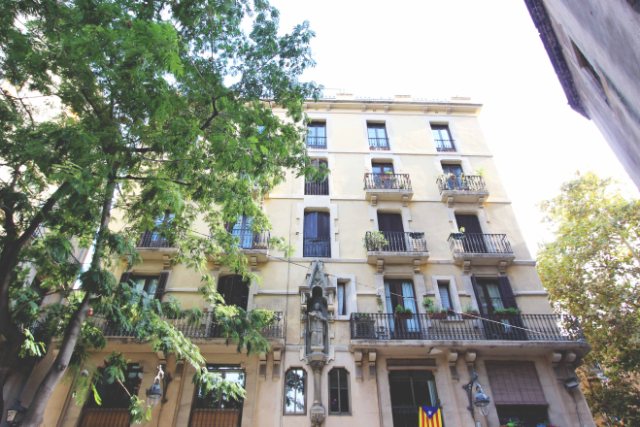 I would also like to thank the Bertelsen family for making the huge sacrifice to come over here to visit and explore a new city with us! It was such a blessing to have you with us on an adventure and so much fun to share it with you. We hope very much that this is the start of many adventures to come! I think it is so important for families to travel together and discover new customs and cultures. It is the ultimate destroyer of comfort-zones, which is why experiencing it with each other is so important, as it forges new bonds and ideas. We had a wonderful time exploring with you all!

Imagine traveling the world with your best friend. That's me. Most people settle down after getting married- we fled the nest. We are following opportunity around the world, in hopes of finding adventure together. And that's what this blog is about. Love- on the run. Stick around and get to know us!

© Copyright Newlyfleds 2020. Made by Bluchic